Service Ride Along With Sam Bullock

Welcome to the first edition of the Service Ride Along blog series!

For my first Ride Along, I accompanied Sam Bullock on a service stop in Cheshire, Connecticut. On the morning of the Ride Along, I arrived at the office earlier than usual to meet up with Sam before his appointment. As Sam and I make our introductions, his friendly nature and professionalism as a technician are the first things that I notice. He greets me with a handshake and a smile and begins to prepare his truck for the day. 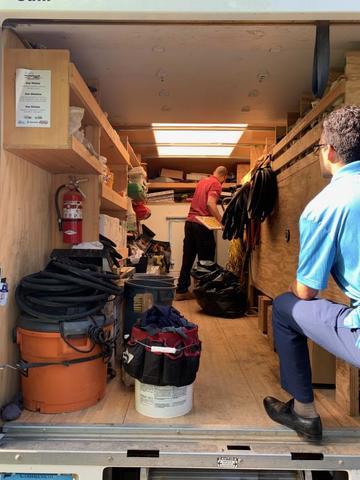 Before we leave, Sam loads his truck with anything and everything that he might need for his upcoming stops. He explains the importance of being prepared at every appointment – you never know for sure what equipment you might need at a service stop, after all. This is exactly why Sam maintains a high level of organization in his truck, with labeled shelves and compartments for each different piece of equipment. Now that Sam has prepared himself for a day of service stops, it is time to hit the road.

The drive to Cheshire is only about 30 minutes long, but in that time, I learn a great deal about Sam. He is a casual New York sports fan – Giants, Knicks, Yankees – and loves to travel. He talks about his family and his experiences on a recent trip to France (Italy is next on his list of places to visit). Sam is easy to talk to and our ride together is enjoyable. It is easy to see why he has been an integral part of the Connecticut Basement Systems Service Team for over 15 years.

As we get closer to the customer’s home, Sam’s focus shifts back to his morning appointment. Still on our drive, he calls the customer to let them know that we are on our way, and to give them notice of when we will arrive. As I question Sam about the appointment, I learn that he has performed annual maintenance at this address for the past five years and as a result, knows the homeowner quite well.

Sam tells me that the customer was once in the Military Police Corp and is now a retired State Trooper. When we pull into the driveway and the homeowner opens his door, they shake hands and greet each other almost more like friends than business acquaintances. They ask about one another’s family and the homeowner nods as Sam heads down to the crawlspace – it’s clear he is familiar with the home and doesn’t need much direction. 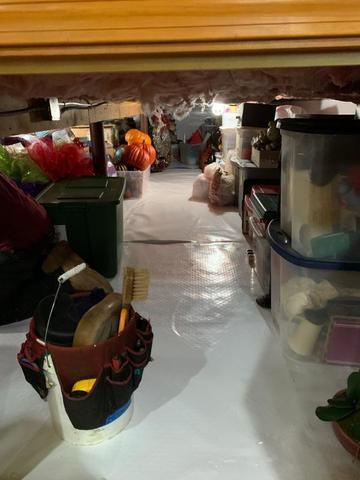 Luckily for me, the crawl space is well-kept and relatively spacious. A neat layer of Clean Space Vapor Barrier covers the walls and floor, so the customer can use the area as a storage space, and we stay clean as we crawl through it.

Following Sam, we make our way to the back corner of the crawl space, where the customer’s SmartSump pump and SaniDry dehumidifier are located. Sam is precise but efficient in his work. He cycles the SmartSump and pulls it out to clean it, then tests the battery and moves onto the SaniDry dehumidifier. As he changes the filter and checks the unit for issues, I ask Sam about the importance of annual product maintenance – after all, this customer has scheduled an annual appointment for 5 consecutive years. He responds by explaining the annual service appointments are about catching small problems before they evolve into larger ones. 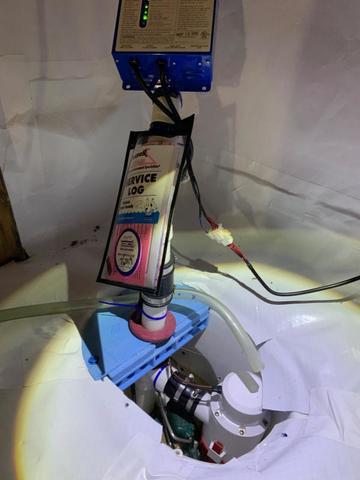 For example, a functional SmartSump or SaniDry will turn off automatically when it does not need to be running. When they are in need of repair, however, it is possible that these pieces of equipment will run continuously, which can lead to high electrical bills and eventually, to further damage to the equipment. Nobody wants to increase the cost of their energy bills, and damaged equipment can leave your home at risk for an increase of moisture, or worse, a flooded area. Sam cleans and monitors the health of these devices, and his quick annual visits have prevented unexpected disasters for countless homeowners throughout his 15-year career. 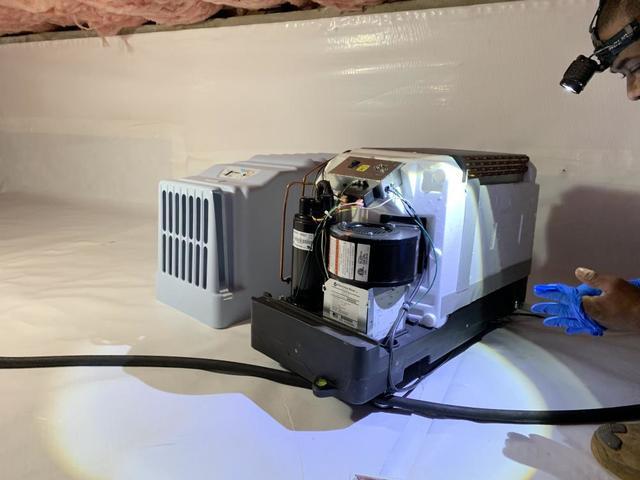 Because of this, Sam recommends that the customer upgrade to a newer SaniDry. Even though the initial cost of upgrading is higher than the cost of the repair to the old unit, Sam believes that upgrading will save the homeowner time and money in the long run, by limiting future repairs. After some thought, the customer thanks Sam for his advice, but still decides to keep his current dehumidifier and pay for the repair. Even though this goes against his recommendation, Sam respects the homeowner’s decision and loads the dehumidifier into his truck without any further discussion.

After preparing some quick paperwork, Sam is packing up and shaking hands with the homeowner once more. I’ll be staying with Sam for one more appointment, so we head back to the truck and get back on the road. When we arrive at the next address, Sam tells me that this dealing with this house will be slightly different, since he has never made a visit here before. For new jobs like this one, he is always sure to introduce himself to the homeowner and ask them where to enter and exit the house before removing any equipment from the truck. 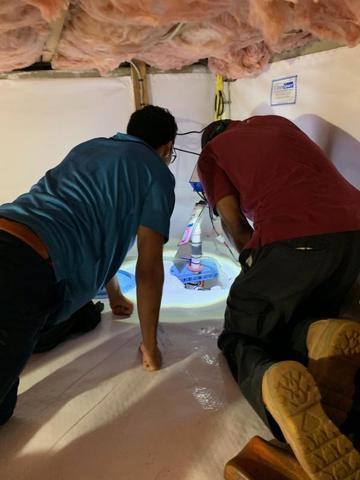 After another friendly introduction we move into the basement, where the homeowner talks with Sam and is surprised to hear that the battery on her TripleSafe sump pump may need to be replaced soon. Sam is understanding and provides a clear explanation. He relates the sump pump battery to the battery in a cell phone. Just like a cell phone, the battery in a sump pump loses capacity over time (typically about 7% each year). Eventually, the battery cannot hold a charge long enough to remain effective and must be replaced.

Connecticut Basement Systems recommends that customers replace their TripleSafe sump pump battery every 3 years, but sometimes they can last longer, especially if they have not had to run extensively over that period. Sam carries a piece of equipment that can measure the remaining capacity on the sump pump battery. Luckily, this customer has taken good care of her sump pump by scheduling annual maintenance every year since it was installed, and as he plugs the device into the battery and reads its output, he ultimately decides that it will not need to be replaced until next year. 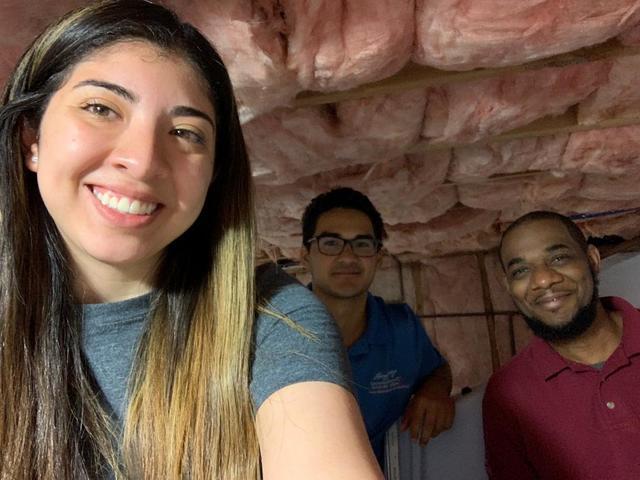 Though Sam has several more appointments to run, my day on the road is nearing its end. But as Sam packs up on his second job of the day, he talks a little more about the role of Service Technicians at Connecticut Basement Systems. He knows that homeowners are often wary of being sold on work or equipment, and so I asked Sam about his approach to this. Sam explains that his job is not only to provide service to equipment and homes, but also to be honest and transparent with every one of his customers. He performs maintenance, gathers information, and relays his recommendation to the homeowner. He explains that beyond this point, all decisions are ultimately in the customer’s hands.

While Sam’s friendly personality and professionalism as a Service Technician make it easy for customers to welcome him into their home, I think his ability to be honest and establish a trusting relationship with them is what leaves a lasting impression on them. I am happy to have had the opportunity to ride with Sam today, and to have learned a lot along the way.

Back to Previous Page
Back to News & Events