This basement located in Riverside, CT had plenty of space in terms of square-footage, but was completely unfinished. There was unbelievable potential for this basement but it was a cold, dull, and murky basement. Once the homeowner had realized its potential and knew that it was in need of finishing, a call was made to Total Basement Finishing. Our sales representative, Vincent Orsini was able to inspect the basement as well as listen to what the homeowners wanted the basement to eventually look like. After making a plan and mapping out how to turn this basement into something special, a TBF crew was assembled and put to the task.

With a monster project set to be completed, there were many installations of our solutions that were going to be made. All of the installations and solutions used include the following: Everlast wall panels, a full bathroom, a sewage ejection pump, a SaniDry dehumidifier, a mahogany staircase, 10 doors, 2 smoke alarms, 42 outlets or switches, a base electrical system, 30 light bulbs, and a handrail for the staircase. All of these solutions would prove essential in creating this complete transformation of the basement.

To begin, our crew initially wanted to get the electrical system implemented in order for them to then build the rest of the basement around the system. A sewage pump was also installed in order for maximum performance of draining from the sewage lines. Once the electrical system and sewage pump was installed, the more noticeable changes began. To begin, Everlast walls panels were attached to the wall framing and quickly covered up the unattractive concrete walls. These was do not allow excess water to enter from the basement walls and are remarkably appealing to the eye. As for the staircase, the old staircase was completely renovated with mahogany wood and a new handrail to change the entire visual of the staircase. Everlast half-wall panels were also installed around the staircase to match the rest of the basement.

As for the flooring, a light pecan colored flooring was installed throughout the entire basement. After properly covering the entire basement floor, the concrete was no longer observable and the entire look of the basement had improved greatly. With the largest parts of finishing the basement completed, all that was left were the installations of the outlets, jacks, light bulbs, smoke alarms, the dehumidifier, and one last unique request the homeowners had. With the simple electrical installations made, a SaniDry dehumidifier was then installed which is useful in filtering any unwanted air particles from the basement and keeping the air clean. The last aspect of the basement finishing was the unique request of adding a wall-sized wine storage unit. Made from wood, the design allowed hundreds of wine bottles to be stored in this basement and added a whole new dynamic to the basement.

After this large project was completed, there was clearly a massive change and the homeowners could not have been more grateful. This is a prime example of the unbelievable work our TBF crew can do. 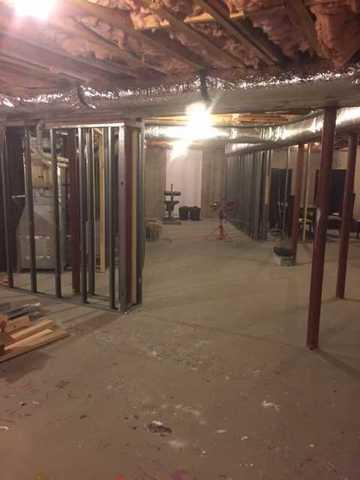 The original look of the basement with some added framing for the walls. 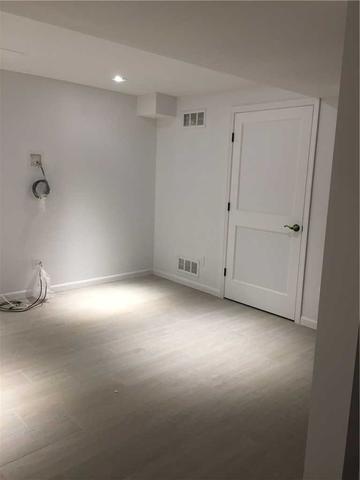 A look at a corner of the basement which had all new flooring, walls, lights and a new door. 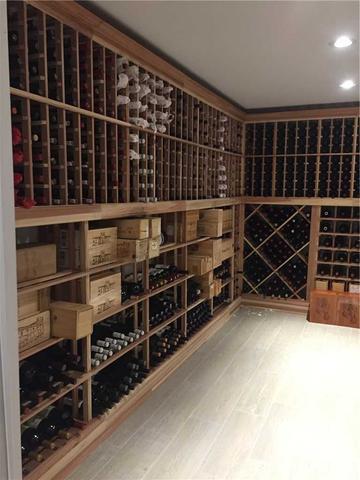 The wine storage unit our crew installed the stretched across 2 walls.

Back to Previous Page
Back to Case Studies